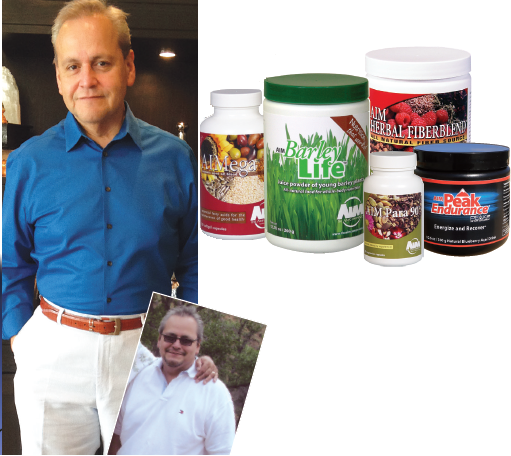 In November 2007, Gil Quintana was diagnosed with type 2 diabetes. It was a family affair: his
two sisters were battling the same disease, and he lost his mother to diabetes after caring for her for ten years. Having a parent or sibling with type 2 diabetes can give you a genetic predisposition for this disease.

Lifestyle choices also contributed to his situation. “I drank six cans of pop daily my entire life,” Gil said, “no water, so I did not know the damage I was doing to my body.” Studies have shown that daily consumption of soda increases the risk of type 2 diabetes. Gil was also physically inactive and overweight—two more risk factors. It was time to for him to make some changes. “This is not how I’m going to die,” Gil decided.

Gil heard about nutrition classes being taught by Liana Kopalyan (AIM Director) in the Las Vegas church they both attended. Gil said, “I started going to her classes in January 2008. I told her right away that I was fighting for my life. Liana said she could help me with that.”

With proper nutrition, the body can heal itself. However, the requirements of each individual are different. Liana first put Gil on a detoxifying program using AIM Herbal Fiberblend® and AIM Para 90®. In terms of his diet, the secret was food combining but no refined sugars or refined carbohydrates. He also ate lots of fruit and vegetables and drank smoothies along with taking the AIM Garden Trio®, AIM FloraFood®, and AIMega®.

In the first month Gil lost 17 pounds. He was actually worried about his quick drop in weight. His pant size had gone from a 42 waist to a 36, and his shoes no longer fit him. However, his doctor reassured him that it was mostly the loss of water weight because Gil had reduced his salt intake. His blood sugar levels were also dropping. “My doctor told me to keep doing what I was doing,” he stated, “and to start working out to tighten up the sagging skin.” When Gil began exercising, he could barely walk two blocks. Liana put him on AIM Peak Endurance™ to increase his energy levels.

Today at the age of fifty-six, he stays physically active by jogging and working out. His weight has gone from 240 pounds to 187. The dramatic positive changes in Gil’s health put him in a position to help others.

Becoming Liana’s executive administrator and a part of her teaching team, Gil is helping to put her business together and write her programs. “I’m kind of Liana’s poster child,” Gil stated.

“I’ve used AIM products for eight years, so people can see that they work. I’ve given my life to God to speak about diabetes. I don’t want people to see it as a death sentence. They can beat it.”

Testimonials should not be construed as representing results everybody can achieve.