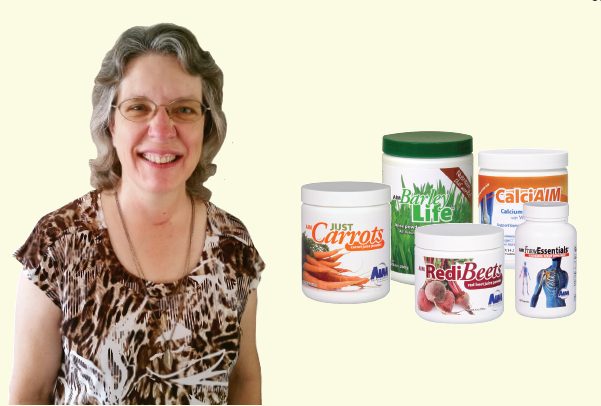 Sandy Joslyn was seriously injured in a car accident nineteen years ago and then caused  further damage to her injury in January 2016 from a fall at home. Since her car accident, Sandy would intermittently lose the feeling in her fingers, her feet and other areas of her body at various times during the day. It took nineteen years for doctors to locate the seriousness of the problem: a crushed portion of her spinal cord.

On March 17, 2016, surgery was scheduled to remove two injured discs from her neck and transplant chips of her bone to replace the discs, the idea being they would grow and fuse together with the vertebrae above and below. Having thoroughly researched the type of surgery she was about to undergo, Sandy prepared for the absolute worst—the possibility of becoming a quadriplegic.

Right at the last minute before surgery, Sandy called her friend Tiki McIntyre, an AIM Director in New Orleans. Sandy was worried that she didn’t have the best supplements for optimal recovery, so Tiki sent her a selection of AIM products. Sandy also had another friend in place to help her.

Seven days after surgery, Sandy stopped taking pain medication although she still had to wear a neck brace. Sandy’s friend had provided meals during that first week; however, her friend became ill. Sandy had to return to her own home, where she began to take AIM products, making them the central focus of her diet with other food as peripheral players.

For breakfast, Sandy had four pieces of fruit, three scoops of CalciAIM, two capsules of Frame Essentials and an iron supplement. For lunch, she made a Garden Trio drink with a tablespoon of olive and flax seed oils along with two more Frame Essentials. For dinner, she drank another Garden Trio beverage, adding raw nuts or some cheese to complete the meal. As the days went on, she began eating soups.

Initially, she had been told that she would have to wear a neck brace for six weeks, but the collar came off at her two-week appointment. X-rays showed that new bone had already formed, amazing both Sandy and her doctor.

Sandy attributes the great results to her medical team, exercise, such as walking and calisthenics, and the nutritional changes she made, especially AIM supplements.