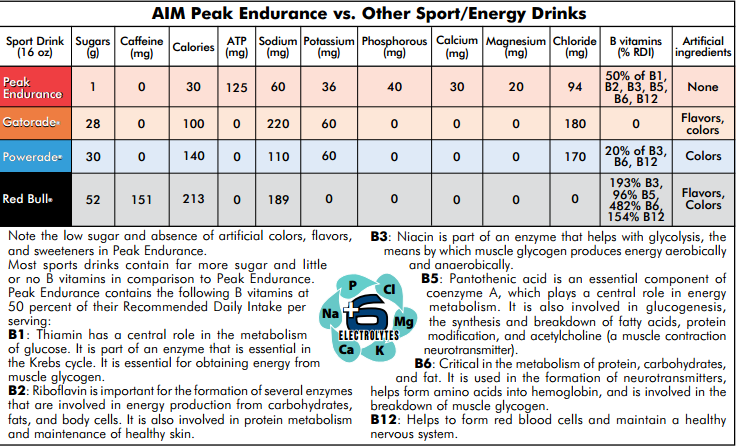 Recently on the Red Rush Blog, I wrote about the UC Berkeley report on sports and energy drinks titled “Hiding Under a Health Halo.” The report didn’t have much good to say about the popular electrolyte-having thirst quenchers, except that they may possess some benefits for adult athletes, but were usually consumed by and marketed to sedentary youngsters. The report also said that water was a superior form of hydration, which is pretty damaging considering that these drinks tout themselves on their ability to quench thirst more effectively then anything.

Peak Endurance has one gram of sugar and contains only 30 calories per serving.

2. Peak Endurance has no artificial sweetners or ingredients.

Low-calorie sports drinks often use sucralose and acesulfame in place of sugar. Both have been linked to alteration of hunger-signaling pathways, making the drinkers hungrier after ingestion. High fructose corn syrup has been linked to endothelium damage and is therefore bad for nitric oxide production, a molecule useful for sports performance.

Sports drinks have been roundly criticized for marketing to children and their possible contribution to childhood obesity.

Peak Endurance isn’t marketed to kids. We don’t recommend that children under 8 drink Peak Endurance at all. (They don’t need ATP. They got it already.)  On our label we suggest that children between the ages of eight and sixteen consume smaller servings. Also, Peak has fewer calories than store-bought sports drinks, less than even a cup of broccoli.

4. Other sports drinks don’t have ATP or enough B vitamins.

ATP is the energy currency of the body. Like Red Rush, Peak Endurance provides natural energy without a crash or sugar buzz.

B-vitamins provide a boost to the metabolism as well as positively impacting athletic performance.

Peak Endurance uses a reasonable amount of sodium to replace what is lost during sweating. Traditional sports drinks contain way too much sodium.

The sodium and potassium in sports drinks are designed to replenish losses that may occur during sweating. However, youth engaged in physical activity do not need the extra electrolytes contained in sports drinks since electrolytes are adequately provided by a well‐balanced diet (Schneider). Further, most youth do not engage in activity for prolonged periods in extreme heat conditions, the only situation that may indicate the need for extra electrolytes during activity (Unnitham & Goulopoulou, 2004). Excessive amounts of sodium, in particular, are typically ingested by both adults and children consuming the average American diet. The average sodium intake of children exceeds established upper limits that are based on concerns about the adverse effect that high sodium intake has on blood pressure, which is an independent risk factor for cardiovascular and renal disease