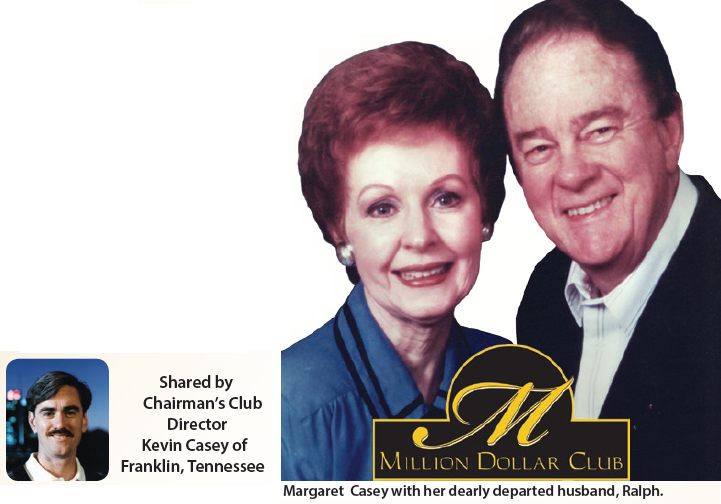 My dad, Chairman’s Club Director Ralph Casey, was a minister, but both my parents used to do a lot of work for churches. It didn’t pay much, but that wasn’t why they did it. My father liked to quote the expression Jehovah-jireh, which roughly translated means “God will provide.” When my parents were about to retire, they were in a lot of debt. The AIM Companies™ showed up, and then they were suddenly doing all right. Maybe it was coincidence. Maybe not.

My mom, Chairman’s Club Director Margaret Casey, and I continue to help people through the AIM products. They’ll call up and want us to place an order and we do that for them, but Dad was the real salesman. People liked him and he liked people. He didn’t mind making phone calls, and as a minister, he contacted people all around the country. He was unique. He never did anything the way it was supposed to be done. Dad didn’t have home meetings or try to sign up all his friends. He just talked to people, and they listened. At one point, I think it was back in 1992, he sponsored five Chairman’s Club Directors in a row.

A great thing about The AIM Companies is the retention rate. People love the products. Once they try the products, they’re bound to stay with them and even come back after being gone for years. The AIM Companies and its people are noticeably different from other network marketing companies. It has always been about helping people, not the money.

One year, at an AIM celebration in Canada, the speaker on stage asked “How many of you are here because you wanted to make money?” Not a single hand went up. They were all there because the money just sort of happened. They found something really good, and then they shared it with people.

Editor’s Note: Margaret Casey, with the help of her late husband Ralph and son Kevin, reached the Million Dollar Club in October 2016. Congratulations!