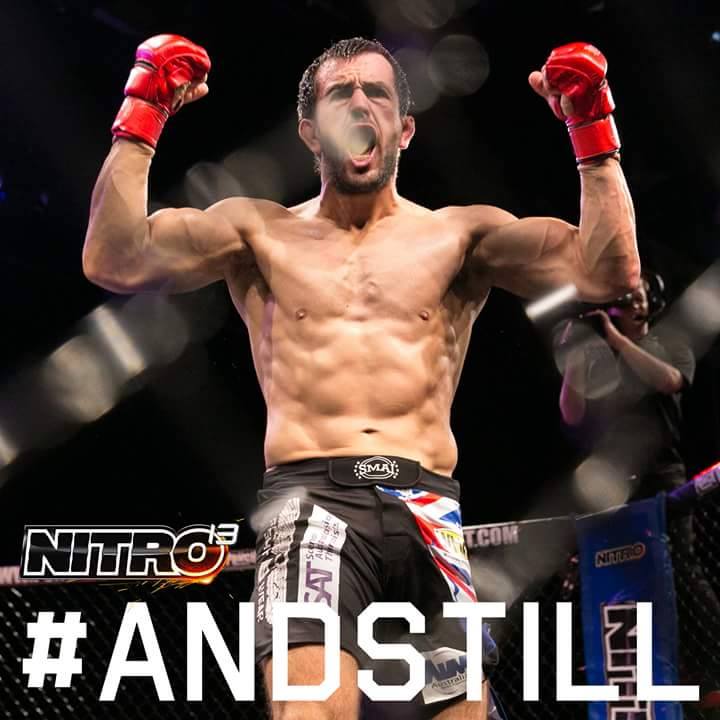 Anton Zafir became the Nitro MMA Welterweight champion in 2014 after defeating Corey Nelson by unanimous decision.  A year later, Zafir who had been sidelined due to injuries successfully defended his title for the first time by defeating Ryan Heketa in under five minutes. We recently spoke to Zafir about his recent win, his fighting style, his nickname and, of course, beet juice.

Anton Zafir: I personally don’t study my opponent as I feel like it throws me off my game; my coaches watch my opponents’ previous fights and they pick up key aspects that I can add to my game that will benefit my style when approaching the fight. I like to continue to develop and improve my game so I am constantly changing.

AIM: How do you adapt to change-ups mid fight?

AZ: It’s great going into a fight with a game plan, but things do change in the middle of a fight, so I trust in my training and my instinct to be able to mold to any situation and find the answer to what my opponent throws at me. I also believe in my coaches and corner, so I listen to them while I am fighting and do what I am being told.

AIM: What sort of training methods do you use to keep up your high level of intensity during a bout?

AZ: I do a lot of circuit training, plyometric training, resistance training, on top of that I just do a lot of situational work for the different styles that I train in. It’s not so much the type of training but the intensity at which I do it. I just force myself to keep going, I have a great team around me that helps to push and motivate me so I can break myself in each session.

In his recent title fight, Zafir knocked Heketa down almost immediately,  getting him into an extended grapple and never giving up the dominant position.

AIM: When you’re in a long grapple like that, how do you know when to strike your opponent and when to try and maneuver him?  Do you strike him to make him easier to maneuver? Can you explain some of the strategies behind grappling?

AZ: The biggest thing we have been working on is staying relaxed in a grapple. It is very easy to become fatigued when in the scramble or wrestle. Knowing when to strike an opponent is something that we have worked on for a quite a while and something that I still have a long way to go. You can use strikes to maneuver him by punching him in a way that gets him to move where you want him to. The other way is you can strike to set up holes; striking to the head sets up the body. Striking to the body sets up the head and so forth. Being able to move in the correct manner as your opponent is trying to escape is also important as it can reduce the amount of energy used to control them.

AIM: You’ve been nicknamed “The Professor.”  Do you feel like this nickname is apt? Or did it just stick?

AZ:  I was nicknamed “The Professor” by the emcee at my first fight after he found out what I did. I am currently a high school teacher teaching Phys. Ed and Science, and I feel like it’s a nickname that has stuck, and it’s not something that I want to change as it becomes a little part of your fighting identity.

AZ: I have a Muay Thai fight in 2.5 weeks for something a little different but am currently looking for an MMA fight overseas at the moment so just staying ready and prepped for any fights that may come up. Otherwise, I would be looking to fight in Australia over the next couple months nothing solid just yet.

AZ: It helps by giving me that extra bit of energy so I don’t fatigue as quickly, I feel like I have that extra bit in the tank to push myself harder in training. I also feel like it’s helping to get rid of the lactic acid which helps as I am not as sore the next day and able to keep working at a high rate.

Anton Zafir is currently fighting in the UFC.